How We Got Started

Seljan Company was not new to manufacturing. We had been exclusively a metal manufacturing business for 30 years. In 1999 we decided to enter the world of rotationally molded plastics. Some of the early parts we molded for other customers were trash receptacles.

We are in a small town in Wisconsin. Most of the management team is from this town and went to high school here. Our team colors are blue & yellow. After going to a football game we noticed that all they had for trash cans were a bunch of rusted out 55 gallon drums with a piece of flat metal for a lid. We thought it would be a charitable thing to make and donate some new plastic receptacles to the school for the football field and the parking lots. We made 20 of them. A few months later the president of the company was getting a haircut and his barber mentioned how much better those trashcans looked.  The idea was born and we named it KOLORCANS. We decided to redesign the trashcan and improve it. We created handles that are recessed to make it easier to move. We came up with the first all plastic dometop that didn't have springs or hinges. The door is designed to always close on it's own.

Along with that we thought about trash bags and how expensive those were to just toss into a landfill. We came up with a liner with handles. Maintenance people liked them alot. We got a lot of feedback from our local parks & recreations director and continued adding new lids and sizes. Seljan Company has a mold department that makes all the KOLORCAN molds. We've got customers on the Atlantic coast that needed bins that wouldn't blow away. The ability to do custom projects efficiently is our strong suit.

Fast forward to today. KOLORCANS are being used at university's, major league ball parks, beaches, hotels, mall, airports, factories and just about anywhere you can think.

PS. Those first cans we molded for our school are still sitting there. Year around in Wisconsin and they still look and function great! 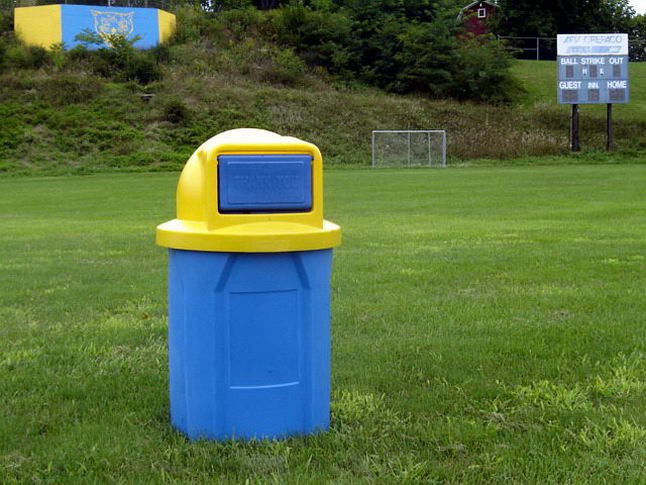